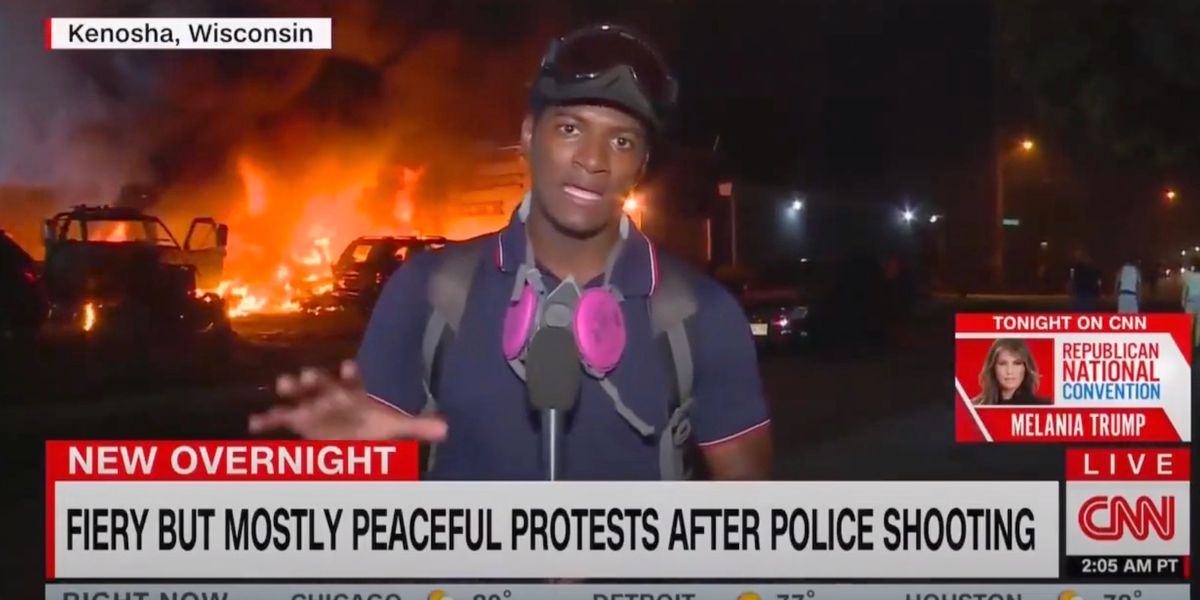 The CNN cable news network faced ridicule and mockery after social media users shared a scene from their coverage of riots with an incongruous chyron description.

The news chyron read, “Fiery but mostly peaceful protests after police shooting,” as a CNN reporter stood in Kenosha, Wisconsin, in front of a conflagration set off by the rioting over the police shooting of a black man.

Screenshots and a video of the ironic scene were widely circulated on social media:

In the video, CNN national correspondent Omar Jimenez noted that earlier in the day that the protests were “largely peaceful” but that they “became a little more contentious” after night fell.

Jimenez then recounted the measures police took to disperse the protesters, implying that police aggression was the cause for the rioting.

“And then what you are seeing, the common theme that ties all of this together,” Jimenez continued, “is an expression of anger and frustration over what people feel like has become an all-too familiar story playing out in places all across the country, not just here, in Kenosha, Wisconsin.”

Twitter users roasted the news network over the bizarre juxtaposition of imagery and chyron.

“It’s impossible to dunk on CNN harder than it dunks on itself,” noted Buck Sexton.

“Y’all…. I have just confirmed… this is real. THIS IS F***ING REAL. This is CNN,” responded Jason Howerton.

“This is what a Biden Presidency will bring to your city. Hats off to CNN for having the stamina to continue to carry water for democrats,” said California state Sen. Melissa Melendez (R).

The protests and rioting raged on in Kenosha, where an altercation between rioters and counter-protesters led to the shooting deaths of two protesters and another being injured on Tuesday.

Here’s a video of the segment: