LeeAnn Miller would like an explanation from Facebook after the ad account for her business was disabled by the tech giant seemingly for no other reason than being patriotic.

Miller, 50, is a wife, mother, and a business owner. In 2019, when her youngest son, Hollis, started college, she decided that after spending many wonderful years as a stay-at-home mom raising children, she would like to get back to work and help contribute to the financial stability of her family. That year, Miller had an idea. Holding the conviction that there is no better place on Earth than the United States, and desiring to give back to her country, she
founded PatrioticMe, an online retailer that sells various clothing items.

“It took about a year to get things exactly the way I wanted them, the products and the website,” Miller told TheBlaze in an interview.

The apparel sold by PatrioticMe has, well, an obvious patriotic flair. These are shirts adorned with red, white, and blue or an outline of the United States. Hoodies with the American flag. Hats you could proudly wear to your Fourth of July cookout and every other day too, just because you love America. And the business, which launched on Sept. 11, 2020, to honor the heroic American first responders of the 9/11 terrorist attacks, was a success at first.

“I had been a stay-at-home mom for years, and I was glad to be back in the workforce doing a little something to contribute to my family’s income and future,” Miller said. “I believe in my product, I have a great product, I love the shirts, they’re comfortable. We get great reviews on them from the people who have bought them. And I really felt like I was doing something good for the country, to promote patriotism.”

A portion of every sale is donated to the Tunnel to Towers Foundation, a charity founded to honor the sacrifice of New York City firefighter Stephen Siller, who gave his life to save others as a first responder on Sept. 11, 2001. Tunnel to Towers provides mortgage-free smart homes to veterans or first responders with catastrophic injuries suffered in the line of duty or to gold star families with surviving spouses and young children.

“I chose from the very beginning not to be partisan, at all,” she explained, noting that her products are for every American. “I feel like that is so important. I want everybody to be patriotic.”

The trouble with Facebook began the day after the election.

Miller, in partnership with Quantify, a business development firm, had advertised her products on Facebook. PatrioticMe’s advertisement was simple. It was made to look like a Facebook post with text before pictures featuring models wearing items for sale.

Loving your country shouldn’t be hidden.

Check out our new line of long sleeve shirts!

We have an attractive range of patriotic clothes to show that love off! 10% off on your order for a limited time!

Every time you purchase, We donate a portion of it to the tunnel to the tower foundation.

Miller provided a screenshot of her advertisement to TheBlaze: 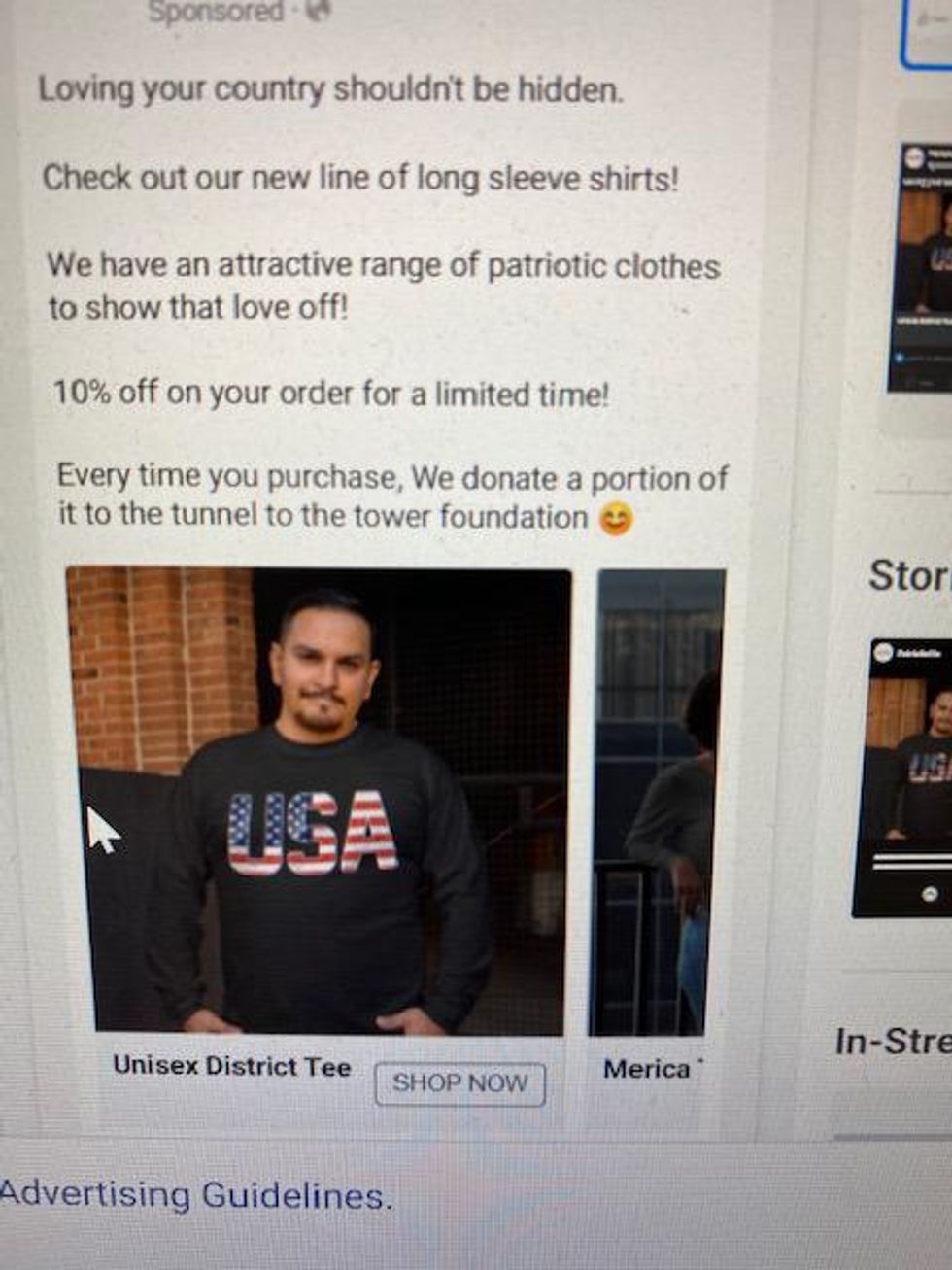 On Nov. 4, 2020, she received an email from the Facebook Ads Team informing her that her advertisements did not comply with Facebook’s advertising policies or other standards.

“Ad Account Disabled for Policy Violation,” declared the subject line of the email, which was provided to TheBlaze.

“It appears your ad account was used to create one or more ads that don’t comply with our Advertising Policies or other standards,” the email stated.

“Our policies and standards help keep Facebook safe and welcoming for everyone. We use either technology or a review team to remove anything that doesn’t comply with our policies or standards as quickly as possible,” Facebook told Miller.

Instead of providing her with guidance as to which policies PatrioticMe’s ad violated, the email provided Miller with a link to the page outlining the entirety of Facebook’s advertising policies. She was also given two options: To take an “e-learning Blueprint course” called “Ad Policies for Content, Creative, and Targeting” to learn about the entirety of Facebook’s advertising policies, or to request a review of her ad account if she believed it shouldn’t be disabled.

The notice came as a shock.

“My shirts say, ‘U.S.A’, or ‘America’, or have the flag or outline the country. They’re all very benign,” Miller said.

Believing her advertisements were disabled in error, she contacted Facebook requesting a review of PatrioticMe’s account that very day. In response, she received a second email from Facebook, nearly identical to the first. After three requests for review, the Facebook Ads Team sent Miller a final notice on Nov. 24 that her restricted account would not be re-enabled.

“All ad accounts are evaluated for policy compliance and quality of ad content. Due to your ad account consistently promoting ads that don’t comply with our Advertising Policies or other standards, the ad account has been disabled,” the Facebook Ads Team told her.

Particularly frustrating for Miller is that throughout the review process, she was unable to speak with a live human being even once about why her ads were disabled.

“They never give anything other than kind of a canned response,” Miller told TheBlaze.

Facebook’s final decision is that PatrioticMe can no longer advertise with its ad account and all of its advertisements and assets on Facebook will remain disabled.

It’s a decision that Miller said has cost PatrioticMe 94% of its traffic.

“I’ve hardly had any sales” since the ban, Miller explained. “What Facebook gave me the ability to do was to promote my business to people that I don’t know around the country, what I would call an ‘organic sale,’ somebody that saw my product, liked my product, and bought it and did not have a personal relationship with me.”

Without Facebook ads, PatrioticMe is having trouble reaching out beyond Miller’s immediate friends and family.

Upon review of Facebook’s advertisements policy and community standards, TheBlaze could not identify what content in Miller’s ad would violate either set of its policies. TheBlaze reached out to Facebook for clarification and for comment, but the company did not respond before this article was published.

Asked why she thinks her ads were disabled, Miller could only speculate that Facebook took issue with her products’ patriotic message.

“I have to believe that in the current climate they were taken down because a lot of people think patriotism is bad. A lot of people think the American flag scares people. It’s really hard for me to understand, but the only thing I really have to go on is what that first email said, that I violated the policy of, you know, Facebook providing a safe and welcoming environment,” she suggested.

“And to me, that’s absurd, that anybody in this country, even people that immigrate here, they come here for what that flag stands for: Freedom and prosperity, and everything that that flag has to offer, and that’s what that flag represents to me anyway. And it’s really hard for me to imagine that it scares people or makes people feel unwelcome.”

Miller wishes that a live human being representing Facebook would communicate with her business and say specifically what is wrong with her ads.

“Please show me the ads that are offensive and please tell me specifically what is offensive about them, and what would meet your community standards. What would I need to do to change my ads to make them acceptable for Facebook?”

“You can report Facebook ads if you think they are offensive. So I’m not really sure if somebody reported my ad, or if some bot picked it up and flagged it, or if an employee of Facebook did that,” she added.

For now, Miller says she is working with her business development partner Quantify to find new ways to advertise and expand PatrioticMe’s reach. But she still wonders why Facebook has rejected her business

“Here I am willing to pay them money to run ads, have they gotten so big that they don’t even care about making money?”