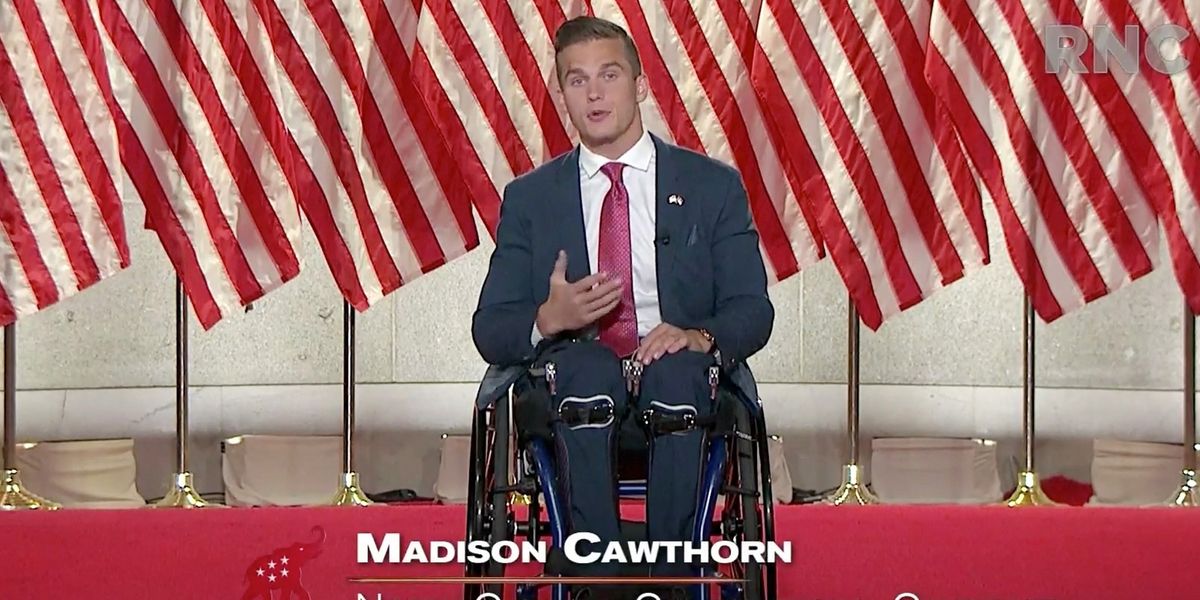 North Carolina Republican congressional candidate Madison Cawthorn delivered a speech with a powerful ending to the Republican National Convention on Wednesday, raising himself up from his wheelchair to stand “for our Republic.”

“This is a time of great adversity for our country, and I know something about adversity,” Cawthorn began, explaining that a car accident when he was 18 years old left him paralyzed from the waist down.

The 25-year-old went on to detail his first experience going out in public in a wheelchair to a professional baseball game, recalling that he “felt invisible” from his new perspective after previously standing at 6′ 3″.

He revealed that at the age of 20, he “thought about giving up,” but he persevered knowing that he could still make an impact.

“My accident has given me new eyes to see and new ears to hear,” Cawthorn said. “So, I say to people who feel forgotten, ignored and invisible: I see you. I hear you.”

The Hill noted that:

Cawthorn, if elected in North Carolina’s largely Republican 11th district, will be the youngest-ever member of Congress, something he noted in his remarks, saying ‘if you don’t think young people can change the world than you just don’t know American history.’

He pointed to the accomplishments of figures like George Washington, Abraham Lincoln and James Madison in their twenties, adding ‘In times of peril young people have stepped up and saved this country abroad and at home. We held the line, scaled the cliffs, crossed oceans, liberated camps and cracked codes.’

As he started to wrap up his speech, Cawthorn told viewers, “You can kneel before God, but stand for our flag.”

Two other men walked up to Cawthorn from either side of him at that point, as the candidate continued, “The American idea my ancestors fought for during The Revolutionary War is just as exciting and revolutionary today as it was 250 years ago. I say to Americans who love our country—young and old—be a radical for freedom. Be a radical for liberty.”

Cawthorn grabbed the bars of a walker stabilized by the men assisting him as he said, “Be a radical for our republic. For which I stand.”

North Carolina Congressional candidate Madison Cawthorn, who has used a wheelchair since an accident at 18, stands… https://t.co/2dJrV0Nwn4