Freshmen Republican congressmen from Texas stayed behind to defend the House Chamber amid the U.S. Capitol siege Wednesday — and even broke off pieces of furniture to use as clubs, according to U.S. Rep. Pat Fallon, one of those who did so.

He noted on Facebook that he witnessed “courage personified” after “the Capitol Police came into the chamber and told us there had been a breach in the Capitol Building.”

Fallon added that police “were short handed” and was “SO PROUD” that Rep. Tony Gonzales, Rep. Ronny Jackson, and Rep. Troy Nehls “didn’t hesitate!!! We augmented the police and stood our ground! We will never be intimated by any mob, regardless of their motivations.”

They broke off pieces of furniture to use as clubs, Fallon wrote.

In fact, Fallon told WFAA-TV that he broke off the stand for a hand sanitizer station. 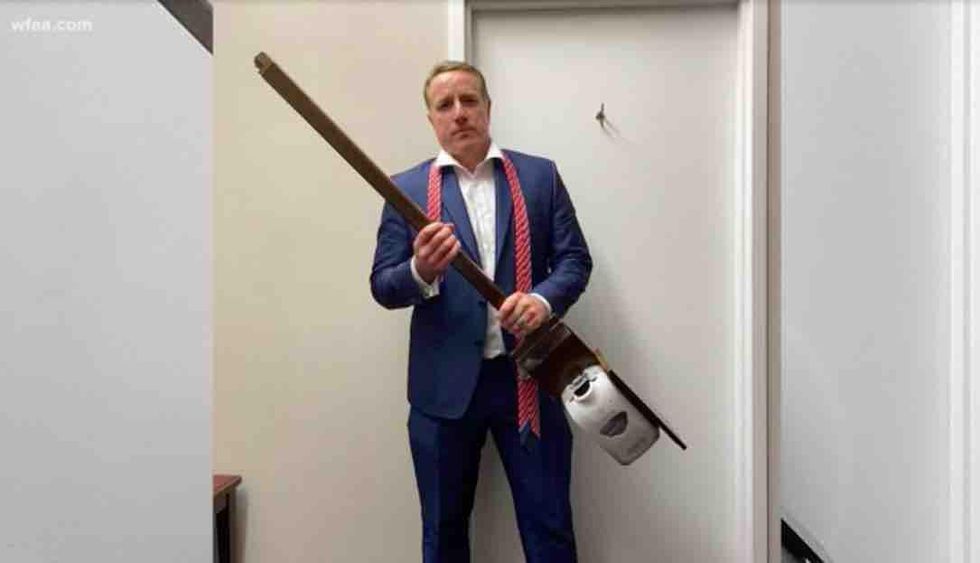 Fallon added to the station that the memory of congressmen coming together gives him chills and makes his eyes well up.

Fallon said Jackson looked at him and said, “I’m not going anywhere.”

“Tony and Troy looked back and nodded reassuringly,” Fallon added. “I remembered what Tim Grunhard (a center at Notre Dame) would say before a big game at home in South Bend. So I repeated it, ‘This IS OUR House! And we’re gonna protect it!!!'”

“I serve with heroes,” Fallon also wrote. “My Texas GOP colleagues have been my friends, and now they are my heroes!!!”

He also told WFAA that “you cannot ever bow to the mob. You never bow to bullies. The people who came in there today were bullies and cowards.”