The United States economy posted a record-breaking rebound in the third quarter and has gone a long way toward recovering from the devastation reaped by the coronavirus-related shutdowns, according to new data released by the Commerce Department.

From July through September, the U.S. gross domestic product grew by 7.4%, which equals an annualized rate of 33.1%, the Bureau of Economic Analysis announced in a news release on Thursday. It’s the largest quarterly GDP gain ever recorded. 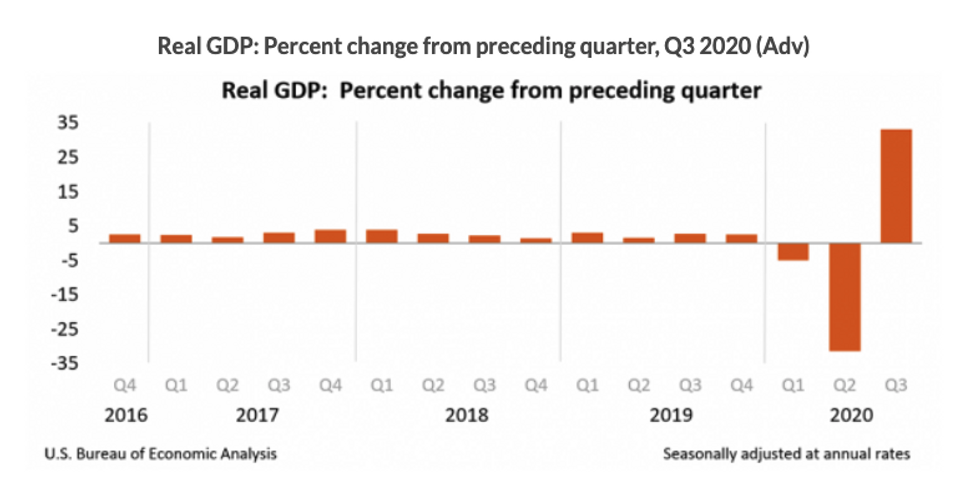 The news, which comes just five days before the election, could provide a boost to President Donald Trump’s re-election chances. The president will undoubtedly tout the new numbers as evidence that he has successfully led the country through difficult economic times.

Though economists largely expected the GDP to rebound at an unprecedented rate in the third quarter, Bloomberg News noted that the increase still managed to top economists’ most recent prediction of a 32% increase, and blew away their forecast of an 18% increase from a few months ago.

The third-quarter gains were powered by major increases in consumer spending and business and residential investment, according to the BEA news release. The industries that benefitted most from increased consumer spending were health care, food services, motor vehicles, and clothing and footwear.

While the latest update is certainly good news for the economy, it should be noted that the third quarter gains followed the second quarter’s 31.4% plunge, which was also a record-breaking number. The economy is still climbing out of the deep hole it plunged into in April and May as the pandemic thrust the nation into an economic standstill.

According to The Hill, about 10.7 million of the more than 20 million jobs lost during the pandemic have yet to be recovered. The nation’s unemployment rate has improved to 7.9% over the last several months, but that figure is still more than double its pre-pandemic level.

“This is going to be seized upon by both ends of the political spectrum as either evidence of the strength of the post-lockdown economic rebound or a cursory warning that the gains could be short-lived,” James McCann, senior global economist at Aberdeen Standard Investments, told CNBC.

“[But] the reality is that the GDP numbers demonstrate that the U.S. economy did indeed rebound strongly as lockdown measures were lifted,” he added.